Riccardo Giacconi, 87, Explorer of the Universe Through X-Rays, Dies

Riccardo Giacconi, an astrophysicist who won the Nobel Prize for pioneering the study of the universe through the X-rays emitted by the most violent actors in the cosmos, including black holes, exploding stars and galumphing clouds of galaxies, died on Sunday in the La Jolla section of San Diego. He was 87.

The National Academy of Sciences, of which he was a member, announced his death.

Dr. Giacconi was one of the great captains of Big Science, leaving lasting imprints on major astronomical institutions like the Space Telescope Science Institute in Baltimore, which runs the Hubble Space Telescope, and the European Southern Observatory in Germany, where he oversaw the building of the largest telescope on Earth. He helped set the pattern for how large scientific projects are run today.

“If you need to do something big, Riccardo was up to the task,” Robert Kirshner, an astronomer at the Gordon and Betty Moore Foundation in Palo Alto, Calif., said by email. Ticking off the observatories Dr. Giacconi directed, Dr. Kirshner called them the “great tools of discovery in the 20th (and 21st) century.”

Dr. Giacconi was awarded a half share of the Nobel Prize in Physics in 2002. (The other half was shared by the astrophysicists Raymond Davis Jr., an American, and Masatoshi Koshiba, of Japan.)

He was also a champion of women in astronomy, appointing women to key positions when he ran the Space Telescope institute. “Riccardo made a point of asking, in faculty meetings, which applicants were women,” the Yale astronomer Meg Urry said in an email.

On his watch, in 1992, the first conference on Women in Astronomy was held at the institute. In his opening remarks at the event, Dr. Giacconi said he had been surprised at how hard it was for women to improve their status in the field and promised to try to make things better.

“Lighting up the darkness with reason and understanding seems to me incompatible with irrationality and prejudice,” he said.

Sometimes difficult to deal with, even his friends acknowledged, Dr. Giacconi insisted on “ruthless intellectual honesty,” said Garth Illingworth, who was his deputy at the institute. Dr. Giacconi expected and demanded that his colleagues challenge him strenuously before arriving at a consensus on an issue.

“The worst thing I could ever do is just agree with him,” said Ethan Schreier, who was Dr. Giacconi’s right-hand man for almost 50 years in various places.

Riccardo Giacconi was born in Genoa, Italy, on Oct. 6, 1931, and grew up mostly in Milan, the only child of Elsa (Canni) Giacconi, a high school math and science teacher and textbook author, and Antonio Giacconi, a businessman. His parents legally separated when he was 8.

Dr. Giacconi, left, received the Nobel Prize in Physics from King Carl Gustaf of Sweden in Stockholm in 2002. “I cut school frequently in Genoa,” he said of his youth. “I was a discipline problem in Milano.”CreditHenrik Montgomery—AFP 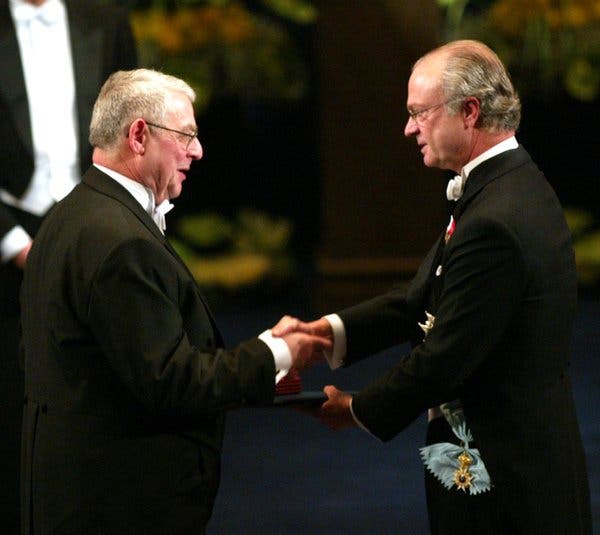 Riccardo was an unruly boy. “I cut school frequently in Genoa, and I was a discipline problem in Milano,” he recounted in a biographical statement for the Nobel committee. He earned his Ph.D. in physics at the University of Milan in 1954 and stayed on for two more years, conducting research on cosmic rays, the energetic particles streaming from unknown cataclysms in outer space.

After stops at Indiana and Princeton Universities, he wound up, in 1959, at American Science and Engineering, a small company in Cambridge, Mass., that carried out research for NASA and other organizations. He participated there in experiments conducted on brief rocket flights, some to detect X-rays from high-altitude atomic bomb tests.

By then he had married Mirella Manaira, whom he had known since high school. She survives him, along with two daughters, Guia Giacconi Trutter and Anna Lee Giacconi; and two grandchildren. A son, Marc, died in an automobile accident in 1991.

Encouraged by George Clark and Bruno Rossi, physicists at the Massachusetts Institute of Technology, Dr. Giacconi and his colleagues set out to see if they could detect X-rays from space.

His group’s first rocket experiment, in 1962 — a sort of flying Geiger counter — was to look for X-rays created by cosmic rays bouncing off the moon. Instead, the scientists found a powerful source of X-rays in the constellation Scorpius; it became known as Sco X-1.

In 1970, Dr. Giacconi’s group launched the first X-ray astronomy satellite, Uhuru, which scanned the whole sky and discovered hundreds of cosmic X-ray sources. Many of these would turn out to be coming from material pouring into black holes — collapsed stars so dense that not even light can escape them. It was the first observational evidence that such strange hypothesized beasts were real.

The next step in Dr. Giacconi’s plan to open a new hotline to nature was a telescope that would produce actual X-ray pictures of the cosmos, a job that required using a newly developed kind of optics.

Dr. Giacconi also wanted the telescope to function as a national observatory open to all astronomers, and that effort required the invention of new ways to plan schedules and archive the astronomers’ observations and make them accessible. To that end he moved his entire group across Cambridge in 1973 to the newly formed Harvard-Smithsonian Center for Astrophysics.

The telescope was launched in 1978. NASA called it the Einstein X-Ray Observatory.

Dr. Giacconi left Harvard in 1981, but not before he had put into action plans for Einstein’s successor, a satellite called Chandra; it is still in the sky today.

He went on to become the first director of the Space Telescope Science Institute, on the Johns Hopkins campus in Baltimore. The institute would be in charge of operating the Hubble Space Telescope, which was then being built and tested.

Dr. Giacconi initially found the institute woefully unprepared, being run by astronomers who had no space experience. “We took responsibility for Hubble beyond the construction of glass and metal to turn it into an outstanding scientific tool,” he said in his biographical statement.

One crisis came soon after the telescope was launched, in April 1990: Its primary mirror was found to be misshapen and unable to focus images. Hubble risked becoming a laughingstock, a “techno turkey,” in the words of Senator Barbara Mikulski of Maryland. 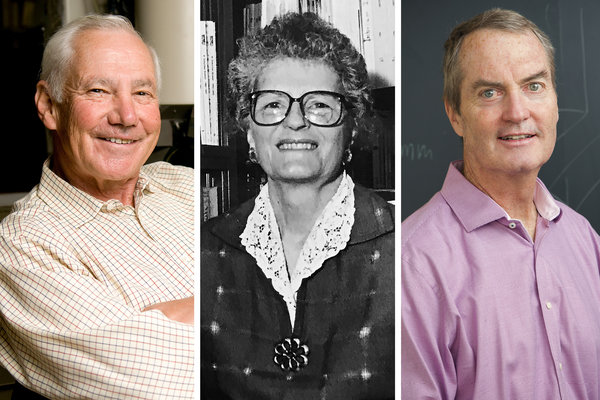 A memorial to those who lost their lives in 2018

“Everyone went into a funk,” said Dr. Schreier, his frequent collaborator.

To address the problem Dr. Giacconi set up working groups at the Space Telescope institute, enlisting astronauts, engineers and experts on software and optics. And in December 1993, spacewalking astronauts installed new corrective optics on the Hubble, restoring its vision to its original crystalline promise.

By then, however, Dr. Giacconi had decamped for his next job, as the director-general of the European Southern Observatory.

Headquartered in Garching, outside Munich, the observatory is one of the largest scientific collaborations in the world, with 16 European member nations and a set of innovative telescopes in Chile. Dr. Giacconi applied the lessons learned from the Einstein project and the Hubble Space Telescope in overseeing the building of the world’s largest array of telescopes, called the Very Large Telescope, on Cerro Paranal, a mountain in Chile.

The V.L.T., as it is known, is a quartet of telescopes that, with mirrors eight meters in diameter, can be used together to mimic the abilities of an even bigger telescope. Last summer, astronomers using it made a breakthrough when they delimited the properties of a supermassive black hole in the center of the Milky Way.

Dr. Giacconi moved back to the United States in 1999 to become president of Associated Universities, a Washington consortium that runs the National Radio Astronomy Observatory for the National Science Foundation.

Under Dr. Giacconi, the radio observatory, in conjunction with his old outfit, the European Southern Observatory, and later joined by Japan, Canada, Taiwan and Chile, built a $1.4-billion radio observatory in Chile known as the Atacama Large Millimeter Array, or ALMA, to study planets and the births of stars, among other things. It began operating in the Chilean desert, at the nosebleed altitude of 16,000 feet, in 2011.

Last year, ALMA participated with other radio telescopes around the world in an effort to take a picture of the “shadow” of the black hole at the center of the galaxy.

As usual, however, like the Lone Ranger, Dr. Giacconi was already gone. He retired in 2007, having completed a tour of the electromagnetic spectrum, from X-rays to visible light to radio waves.

“I am grateful to live in this heroic era of astronomy,” he was quoted as saying when he was awarded the Nobel.

He had his own particular take on that heroism. Befuddling his colleagues and NASA, Dr. Giacconi, a sailor, originally wanted to name the Einstein X-Ray Observatory the Pequod, after the ship in “Moby-Dick.”

“I want to find that white whale,” he once told a colleague.

When a reporter asked him why he wanted to name his observatory after a doomed ship, Dr. Giacconi referred to a passage from Dante’s “Inferno,” in which Odysseus urges on his frightened sailors, telling them, “Consider your origin: you were not made to live as brutes, but to pursue virtue and knowledge.”

Of course, all of Odysseus’s men died in the end.

Dr. Giacconi laughed. “The pursuit of knowledge,” he said, “doesn’t always have a happy ending.”